The invention which
has instantaneously revolutionized
the field of ophthalmology

No surgery required and nothing touches the eye
2

Lasts only a few minutes and no dilation is needed

Uses invisible light and no sensation is felt 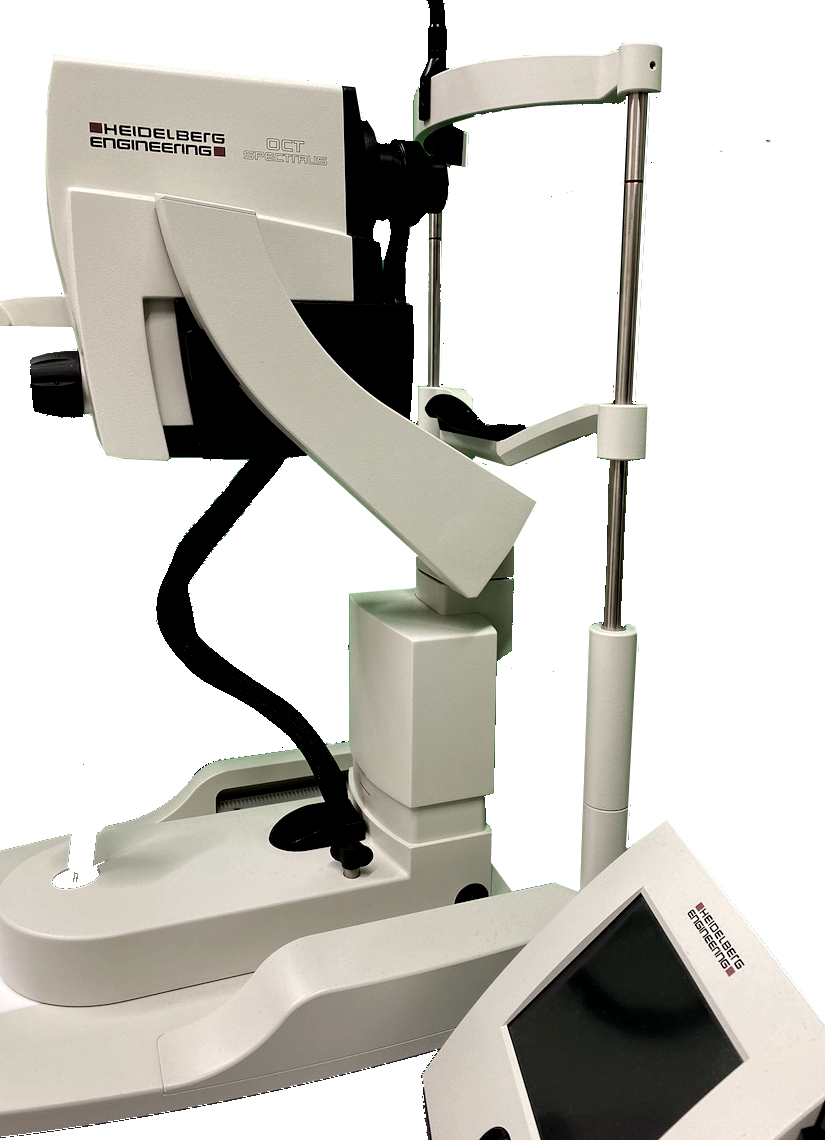 When OCT examination is required:

When OCT exam is recommended:

When you can spare on OCT exams 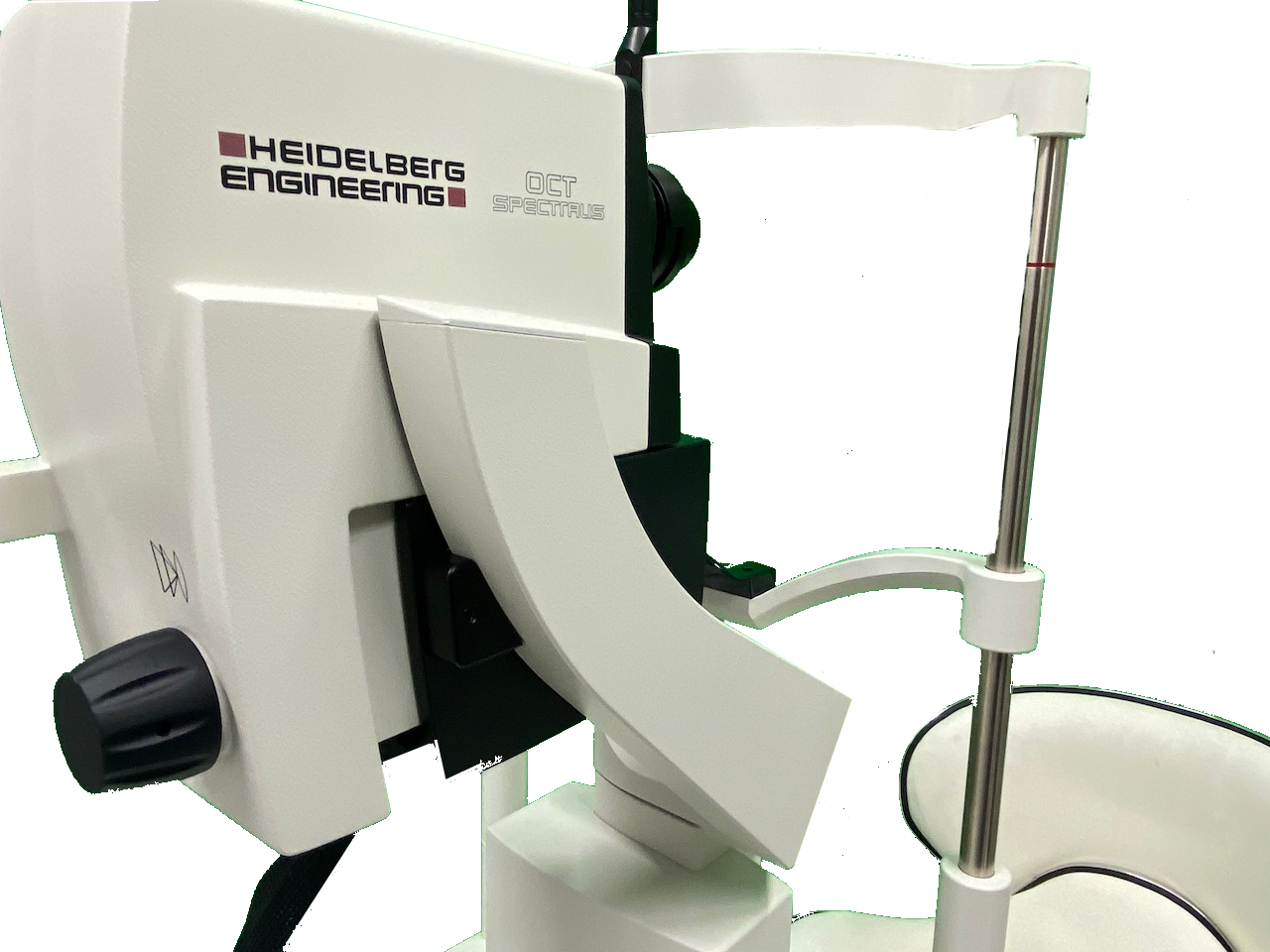 Not sure if you need
electrophysiologic testing? 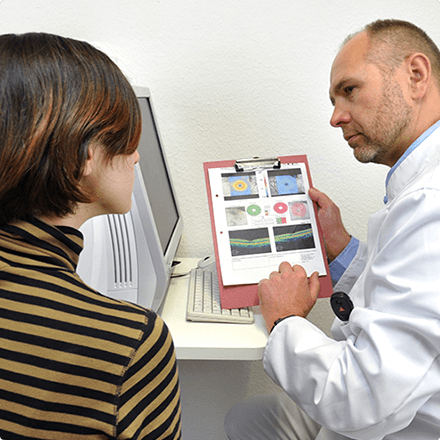 Prior to OCT technology, retinal conditions were only described and diagnosed clinically. These cross-sectional scans have provided crucial insight into the pathogenesis of ocular conditions by deciphering which specific layers are involved and better visualizing the disease process.

OCT scans are performed with a patient sitting upright with their chin in a chin rest and forehead against a bar. Unlike ultrasound, OCT can be utilized with air as the medium rather than gel. This form of imaging is noncontact, noninvasive, and takes only a few minutes. A harmless and invisible laser painlessly scans the retina and optic nerve head. Vision remains unaffected and no dilation of the pupil is required. The data is calculated and analyzed through a computer system. The new recordings and measurements are automatically saved and compared with previous scans to assess potential changes. Even the slightest value discrepancies of the retina and optic nerve head will be identified. The course of progression is graphically plotted to easily visualize changes over time.

While diagnosis and interpretation using OCT takes intimate familiarity, experience, and training, non-professionals can use some basic principles for rudimentary interpretation.

Depending on the type of OCT instrument being used, analysis of the scans may clearly state if thickness measurements of the RNFL, GCL, or macula are normal, abnormally thin, or abnormally thick. Color indicators may also be used to depict the relative thickness or an area or layer compared to age-matched controls. Careful attention to the color key is necessary as color scales may vary (and even be opposite) depending on which ocular structure is being viewed. 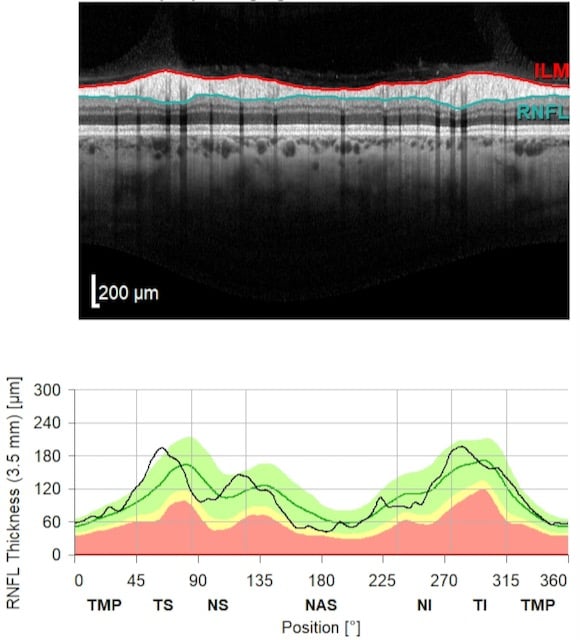 Generally, a healthy posterior segment of an eye displays no clinical or OCT abnormalities. The extraordinary sensitivity of OCT  allows for visualization of individual ocular structures of the such as the optic nerve as optic nerve head, retinal nerve fiber layer (RNFL) and axons of retinal ganglion cells as  different retinal layers as well.

With OCT, a large devoid space is visible where axons exit the eye and edema is not observed at the surface along the edge margins. The vitreous appears dark and absent while the internal limiting membrane (ILM) and retinal nerve fiber layer (RNFL) are highly reflective. The RNFL will be thicker nasally than temporally, corresponding to the papillomacular bundle. 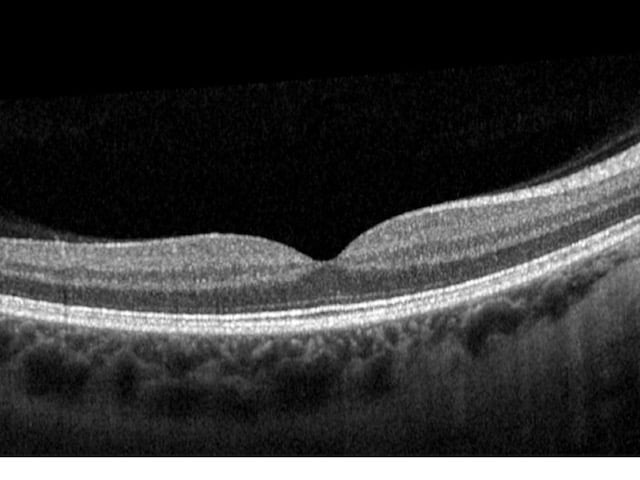 Retinal layers will appear distinguishable, smooth (no breaks), and  even while a small dip in contour is observed at the fovea. The posterior cortical vitreous may be delicately attached to the macula or floating above the macula.

The inner and outer nuclear layers as well as the ganglion cell layer (GCL) have minimal reflectivity. The external limiting membrane (ELM), photoreceptor integrity line (PIL), and retinal pigment epithelium (RPE) are hyper-reflective. Posterior to these layers is the less reflective choroid.

Diseases Of The Optic Nerve

Along with perimetry (visual field testing), the OCT has become the standard of care for glaucoma diagnosis and management over the last decade. The strongest indicator of glaucoma is progressive thinning of the RNFL along the papillomacular bundle over a given time. ONH structural changes in the form of excavation or cupping are quantifiable using OCT. Atrophy (thinning) of the retinal ganglion cell layer (GCL) and total macular thickness are also measurable.

Typically, initial ischemic optic nerve damage causes moderate or severe swelling of the ONH due to lack of oxygen. Treatment with steroids remains controversial as no benefits have been confirmed. Usually this swelling resolves in 8-12 months after NAION onset, but without vision recovery. Chronic NAION demonstrates RNFL and GCL thinning. OCT angiography is a particularly useful diagnostic tool in the diagnosis of NAION as it is capable of revealing reduced capillary density or attenuation of patent vessels.

Leber Hereditary Optic Neuropathy: In LHON, primary damage occurs at the level of the retinal ganglion cells with secondary involvement of the optic nerve. OCT plays a key role in diagnosis and stage determination of LHON as OCT patterns differ greatly by disease state. In early or acute episodes of LHON, the RNFL may demonstrate thickening due to axonal edema. In general, chronic LHON demonstrates primarily temporal thinning of the RNFL and severe GCL loss due to progressive atrophy.

The optic nerve is known to be vulnerable to systemic autoimmune inflammation. Clinical OCT findings demonstrate that the temporal aspect of the RNFL is most affected in optic neuritis which reflects not just local pathological characteristics, but brain axonal degeneration processes. Macular scans reveal prominent reduction of GCL thickness from cellular damage and subsequent atrophy. Chronic optic neuritis demonstrates significantly thinner RNFL beginning a few months after onset. Similar to other conditions, during acute episodes, ONH swelling may cause a thicker than normal RNFL.

OCT has demonstrated usefulness in differentiating ONH edema from buried drusen. While edema presents with altered RNFL and GCL thickness, drusen leaves these layers unaffected. With edema, the anterior ONH may reveal an abnormal RNFL swelling, yet the posterior ONH will have a smooth contour. However, with small or moderate buried ONH drusen, the anterior ONH usually remains unaffected while the posterior ONH demonstrates “bumps” evident of buried ONH drusen. Severe ONH drusen may cause RNFL atrophy and mild vision loss.

Changes Of Retinal Ganglion Cells
Due To Optic Nerve Damage. 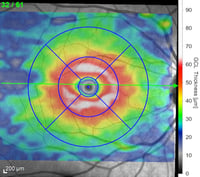 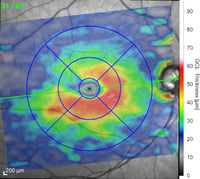 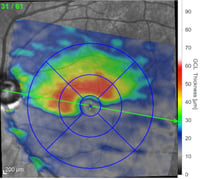 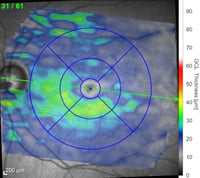 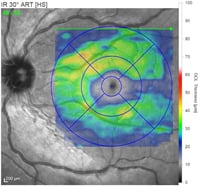 Diffuse and severe RGC loss of the macula with complete RGC loss in the fovea.
Leber Optic
Atrophy 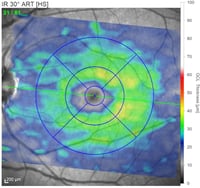 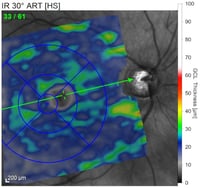 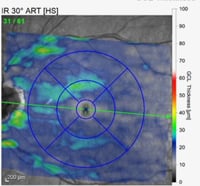 Almost complete loss RGCs of the macula  due to ischemic damage of the nerve. 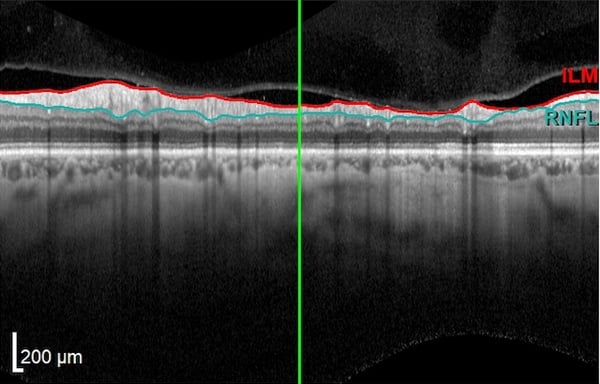 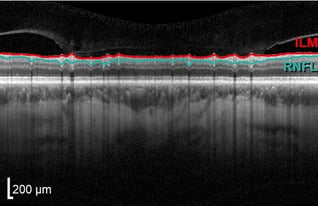 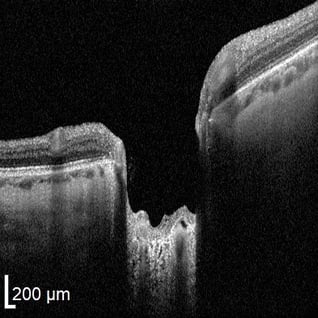 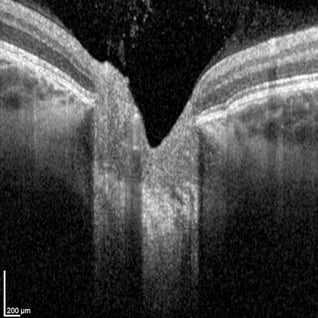 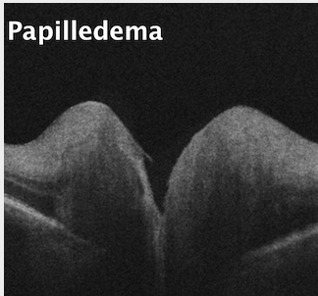 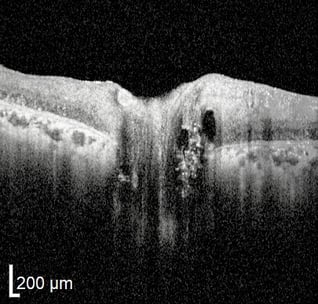 Diseases Of The Retina

RP is a progressive retinal dystrophy emerging in the peripheral retina before advancing centrally. OCT will reveal loss of the photoreceptor integrity line (PIL) throughout the retina as well as choroidal thinning. In the macula, both foveal thinning and thickening may be observed and cystic macular changes may be noted. In later stages, foveal atrophy occurs due to cone degeneration in the macula (center retina). Cystoid macular edema (CME) accompanies up to 20-30% of RP cases and can cause a disruption of central vision due to structural abnormalities of the macula. OCT imaging is extremely important to diagnose, manage, and initiate therapeutic intervention.

With cone-rod dystrophy, abnormalities in the PIL are observed especially at the outer segment of the photoreceptor layer and primarily affect the fovea (part of the central retina responsible for sharp vision). Additionally, OCT autofluorescence may reveal a perifoveal hyperfluorescent ring due to photoreceptor disorganization and RPE changes/atrophy. Increased lipofuscin may be seen within the RPE.

Macular drusen is the hallmark of age-related macular degeneration (AMD). Clinically, drusen appear as yellow or white deposits in the retina. With OCT, drusen are observed as focal deposits in the outer retina, between the RPE and Bruch’s Membrane. In early and intermediate AMD, no associated choroidal thinning is typically observed. However, in advanced AMD, thinning of the choroid may also be noted. In advanced AMD, other retinal abnormalities are also visible with OCT.

Retinal Pigment Epithelium (RPE) atrophy: With RPE atrophy, pigment migration is observable as an accumulation of material in some areas of the RPE and a lack of pigment in other areas. The RPE may thicken in areas of material accumulation and thin in other areas due to atrophy. Such changes result in an irregular morphology of the RPE. The RPE can also exhibit porosity, observable as gaps or holes in the layer itself.  Less often, a choroidal neovascular membrane may form, pushing the RPE anteriorly. 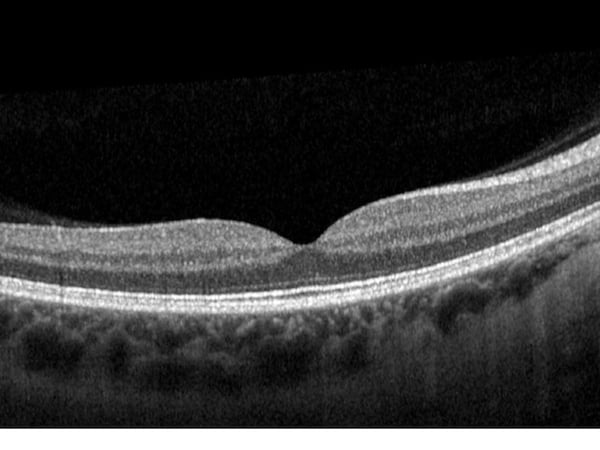 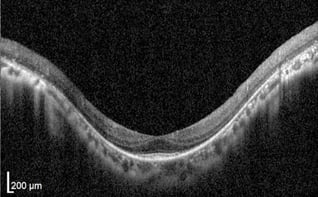 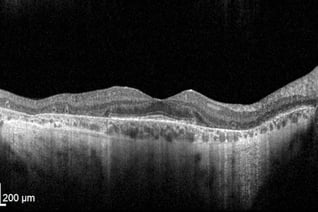 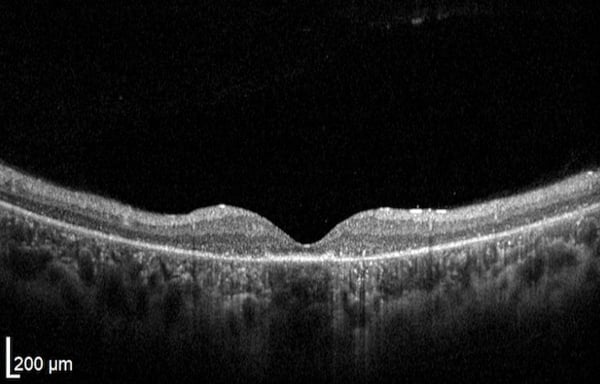 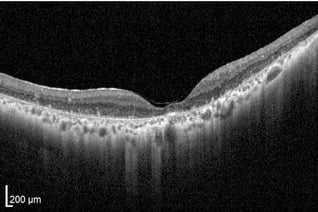 When my fiancee lost the majority of her sight shortly after our engagement, doctors in the UK told us there was no hope of recovering Alex's sight from optic neuritis. We were devastated and felt like giving up. We spent two weeks in Berlin, receiving treatment and excellent, attentive care from doctors Anton Fedorov and Julia Chibisova. They were both amazing during our time and explained everything in detail. I am pleased to say that Alex is seeing great improvements, which seem to be getting better all the time. We cannot thank them enough, and we're so grateful. We will definitely go back for more treatment and would recommend to anyone in a similar position to contact the Fedorov Restore Vision Clinic.